The eruption of Mount Semeru in Indonesia in December was triggered by rain and storms, which makes eruptions harder to predict, experts say.

Indonesian volcanologists say that several days of heavy rain had gradually eroded Semeru’s “lava dome”, a circular mound-shaped protrusion that forms from the slow extrusion of viscous lava, causing it to collapse.

Geological chief Eko Budi Lelono, from the Ministry of Energy and Mineral Resources, has asserted that this “dome avalanche” triggered the unusually forceful eruption.

“Based on photos and data, we can compare the size of the dome before and after the December 4 eruption. We can see a big mass of the dome’s volume was lost after a heavy spell of rain that day,” he said.

The National Agency for Disaster Management reported that 48 people were killed, 27 were injured, and over 10,000 people were evacuated from their homes.

Officials say that some messages were sent to local administrators in advance of the eruption but acknowledged they did not result in an evacuation order. They say this was, in part, because the volcano's activity was hard to predict because the eruption was triggered by external factors of heavy rain and storms, rather than conditions inside the volcano. Volcanic monitoring is usually based on activity inside a volcano.

The Volcano Observatory Notice for Aviation (VONA) has reported further activity inside the volcano slopes and ash clouds extending to 4.5km above its summit. There are also reports of lava flows at the summit crater.

The BMKG, the Indonesian government agency for meteorology, climatology and geophysics, has previously warned of disasters including floods, landslides and storms, which are becoming more frequent due to climate change.

Mount Semeru is one of the most active volcanoes in Java, with seen in 74 of the past 80 years. With 142 volcanoes, Indonesia has the largest population globally living in close range to a volcano - 8.6 million Indonesians live within 10km of a volcano.

"What needs to be explained to people is the areas where the lava flows, our recommendation is: don't live there anymore," Eko Budi Lelono added. 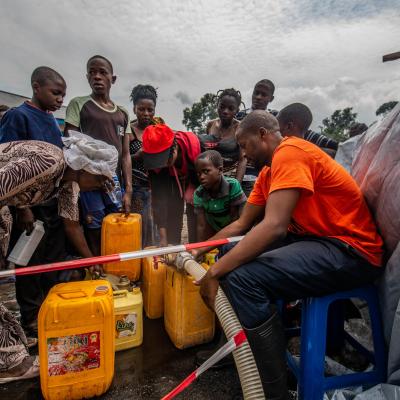 Volcano Leaves 32 Dead, Half A Million Without Water In DRC