Volcano Leaves 32 Dead, Half A Million Without Water In DRC

7 Jun 2021 by The Water Diplomat
Kinshasa, Democratic Republic of Congo 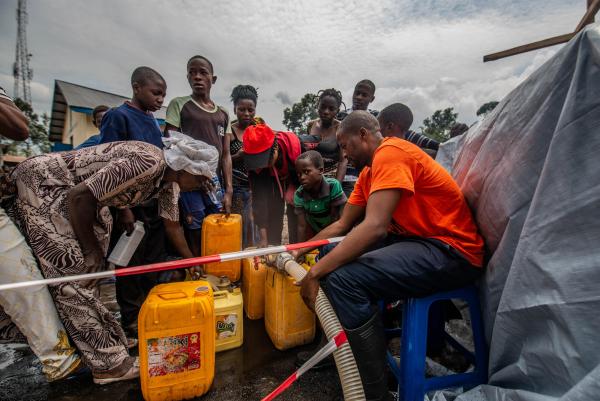 At least 32 are dead and half a million are without access to clean drinking water in the Democratic Republic of Congo (DRC) following the 22 May eruption of Africa’s "most dangerous” volcano, Mount Nyiragongo, according to charity Médecins Sans Frontières (MSF).

The explosion, which occurred six miles from the eastern city of Goma, caused significant damage to reservoirs, pipes and buildings, forcing an estimated 450,000 to flee. With the water supply shut off in large parts the city, locals have no choice but to walk long distances to access water at Lake Kivu.

“We are assisting the immediate needs of displaced people, but it is not enough,” says Magali Roudaut, MSF head of mission in DRC. “More clean water should be urgently provided; cholera is endemic in the area and poses a huge threat to people, including to the host communities.”

MSF is currently providing medical assistance to residents in a bid to prevent the spread of disease, as well as providing locals with clean water in jerrycans - scaling up storage capacity to 125,000 litres. The charity has also erected toilets and donated mattresses to Goma provincial hospital.

“There are urgent needs that are still unmet such as food, latrines, shelters, blankets, and jerrycans for water,” stressed Roudaut. “We demand urgent support of other humanitarian organisations to assist people.”

The UNHCR is on the ground with support in the form of hygiene kits, blankets and communal shelters in overcrowded schools and churches to aid displaced populations.

Scientific director of the Volcanic Observatory of Goma, Celestin Kasereka Mahinda, told The Associated Press that scientists at the observatory were unable to adequately warn residents of the eruption due to a funding cut which left the centre without an internet connection.