Drought and diversion of river water to neighbouring province blamed by demonstrators.

Violent protests, involving thousands of people. have broken out in Isfahan, Iran, over the drying up of a river, with police arresting at least 67 people in recent days.

Drought and diversion of river water to neighbouring Yazd province are blamed by demonstrators.

Police General Hassan Karami told reporters 27 November "We have arrested 67 of the main actors and agitators behind the troubles," adding that there were about 2,000 to 3,000 "rioters" in the protests. Some media sources have reported higher numbers of arrests.

The 27 November protest in the central-Iran city (pop 2 million) was the biggest since the outbreak commenced 9 November.

"Thousands of people from Isfahan, farmers from the east and west of the province, have gathered in the dry Zayanderud riverbed with one key demand: let the river run," a state television journalist in Isfahan reported.

Protesters chanted "Plundered for 20 years" and "the water must return”.

Iran's First Vice President Mohammad Mokhber said that he had "ordered the ministers of energy and agriculture to take immediate steps to deal with the issue”.

Droughts have been taking place in Iran for 30 years, but the frequency has increased recently.

The Iran Meteorological Organization says that an estimated 97 Percent of the country, one of the driest in the world, now faces some level of drought. 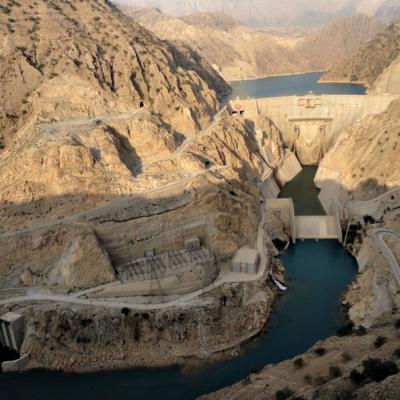 Iran's worst drought in five decades has devastated agriculture and livestock farming and led to power blackouts across the country. Authorities claim the situation is the result o...