4 May 2021 by The Water Diplomat
BISKEK, Kyrgyzstan 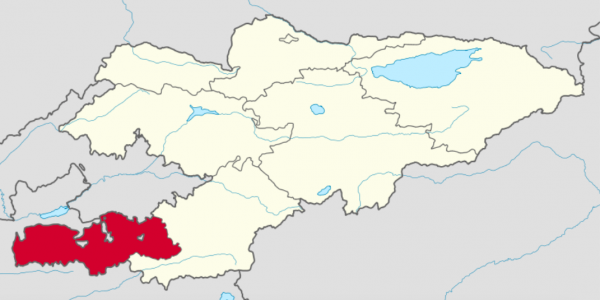 Kyrgyzstan and Tajikistan agreed, 1 May, a “complete ceasefire” to quell clashes that broke out 28 April along the border in Batken Province (Kyrgyzstan, in red on map) between the two countries.

What started out as a rock-throwing incident between villagers from opposing sides quickly escalated with border guards escalating the dispute with machine guns, mortars, and Mi-24 military helicopters, according to Kyrgyzstan’s minister of health [International news.az].

Over 50 people on both sides of the border died and over 150 are reported to have been injured. It has been reported [Al Jazeera] that at on the Kyrgyz side, at least one border post and several houses were destroyed; the Tajiks reported damage to a bridge.

The recent incident arose over the “ownership” of the reservoir and pumping station at the Isfara River and the installation of surveillance equipment that has since been removed.

The Kyrgz / Tajik border is 600 miles long and much of it has been disputed since the collapse of the Soviet regime and the creation of a hard, sometimes seemingly arbitrary border between the two countries. The border is meandering and both sides claim the territory where the most recent fighting has occurred. There are multiple and large ethnic enclaves on either side of the border and access restrictions have contributed to the tension along the border.

Restrictions on access to land and water resources in the fertile Fergana Valley have led to deadly clashes among the three countries adjacent to the valley (Kyrgyzstan, Takjistan, and Uzbekistan) but this most recent incident is considered to be the heaviest in years and has raised concerns of the possibility of a wider conflict.

Russia’s Foreign Minister, Sergei Lavrov, has urged the two countries to uphold the ceasefire agreement. Both Kyrgyzstan and Tajikistan consider Russia a strategic ally and both host Russian military bases.

As reported in Tass, Russian experts on Central Asia assert that the border issue has been neglected and frequent changes in governments (particularly Kyrgyzstan) have disrupted consistent efforts to resolve the issues. Despite “official” willingness, nationalist factions have developed and local communities and reportedly criminal groups have other ideas about how to resolve the disputes.

"On the whole, neither Kyrgyzstan nor Tajikistan is ready to address the border issues. Border regions in both countries are socially and economically depressed. The Fergana Valley lacks agricultural resources - land and especially water. This is why land and water have become the main cause of all conflicts," the expert noted.