Tensions Rise Between Israelis And Palestinians Over Water

Water Appears To Have Been "Weaponised"

As the Jordan Valley region is going through severe drought, tensions between Palestinians and Israelis are rising and protests have been held against water shortages in the month of July.

In an apparent action of weaponisation of water, there are reports that the Israeli Settlements Council has seized a Palestinian water tanker in the Jordan Valley. Local Palestinian authorities claim that several villagers and their cattle depend on the water tanker to provide them and their cattle fresh water while local Israeli settlements are not limited in the development of water infrastructure.

Elsewhere in the Jordan Valley, the village of Duma, surrounded by 3 settlements and an Israeli Defence Forces (IDF) camp is struggling to access drinkable water. Israel’s national water company Mekorot controls 42 water wells in the region, 34 of which were in Palestinian land in the Jordan Valley.

The region is struggling with water access and Jordanian Water Minister Mohammad Al Najjar has stated that 2022 has been the worst year on recorded Jordanian history for water access. While 500 m³/person/annum is regarded as the threshold below which the situation is considered to be of “absolute scarcity”, per capita water availability in Jordan now stands at 90 m³/person/annum.

In Jordan the situation is created by scarce rainfall and higher temperatures and is being worsened by an influx of refugees who are putting more strain on the country’s scarce water resources.

In an attempt to overcome the crisis, the Jordanian government has reached out to Syria requesting 30 million m³. However, Syria has refused this request on the grounds that the region is engulfed in drought, and it is also suffering from scarcity. Hazim El Nasser, Jordan’s Minister of Water and Irrigation, said in an interview: “Approximately 3 million refugees came to Jordan from Syria half of them Syrian citizens and half of them refugees from other countries; this movement of people increased our water demand by 21% in general, but in some areas like in the north the demand has been increased by 40%; this makes our life very difficult."

UNICEF has published a report entitled “Tapped Out — The Cost of Water Stress in Jordan”, detailing the country’s struggles with water access and how its most vulnerable groups are being affected. 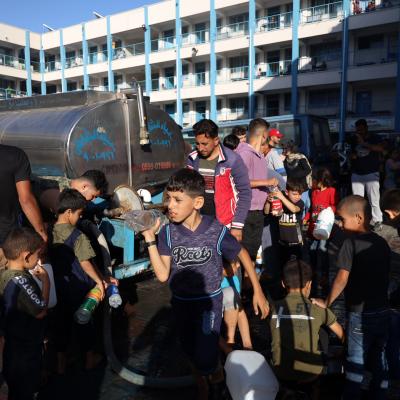 Desalination capacity at heart of new agreement that doubles Israel's transfer of water to Jordan. Agreement met with optimism.