The joint management of transboundary water resources is very rare: more than 500 transboundary aquifers exist, but there are only six functional transboundary groundwater agreements worldwide.

For this reason, the United Nations Economic Commission for Europe (UNECE) together with the Geneva Water Hub (GWH) organised a comparative exchange focusing on the Senegalo-Mauritanian Aquifer, the Genevois Aquifer and the Guarani Aquifer.

Prof Mark Zeitoun of the GWH highlighted the vulnerability of groundwater resources and noted that it is through the exchange of knowledge on the subject that joint groundwater management can be advanced.

In the case of the Senegalo-Mauritanian Aquifer it was the extensive institutional capacity and long experience of the Senegal River Development Organisation (OMVS) and the Gambia River Development Organisation (OMVG) which enabled the countries involved to embark on the process of managing the transboundary aquifer. It has taken two years to develop a programme of action for the aquifer, which is essential as the Senegal basin provides 80% of the water for Senegal, Gambia, Mauritania and Guinea Bissau, and the aquifer is critical resource which enhances resilience to climate change.

Close to urban areas, there are indications that the aquifer is being overused, and there is the threat of quality loss through the infiltration of pollution from the surface as well as saltwater ingress in coastal areas. In 2021 the GWH supported a dialogue on the aquifer in Geneva which led to a declaration of intent by the four ministers involved to work on a joint set of rules for cooperation.

The Aquifer du Genevois is shared by France and Switzerland. The city of Geneva sources some 80% of its drinking water from Lake Leman (a/k/a Lake Geneva) but the remaining 20% is nevertheless crucial.

The lake and the aquifer have been exploited since the 19th century. Overexploitation in the 1960s and 1970’s led to studies of the resource and the development of legal structures to manage the water across the Swiss-French border. Discussions between the two countries took eight years.

The aquifer is vulnerable to pollution from extensive changes to land use activities in its recharge areas, and initiatives have been underway since 1995 to bring government and civil society parties into a joint agreement on the aquifer.

An influential research project in 2003-2009 entitled the Environmental Protection and Sustainable Development of the Guarani Aquifer System Project has noted no conflicts over the resource but has stimulated exchanges of information, leading ultimately to the signing of the agreement on the aquifer by the four countries in 2010. 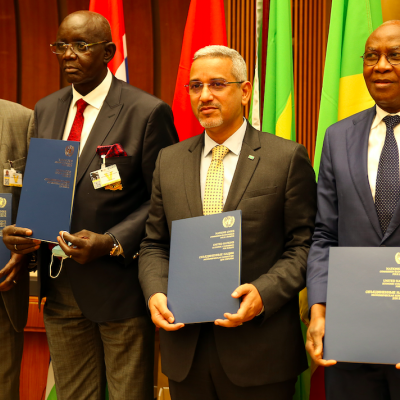 A new permanent mechanism to be established for cooperative management of the aquifer system, including both a legal and an institutional framework for cooperation.