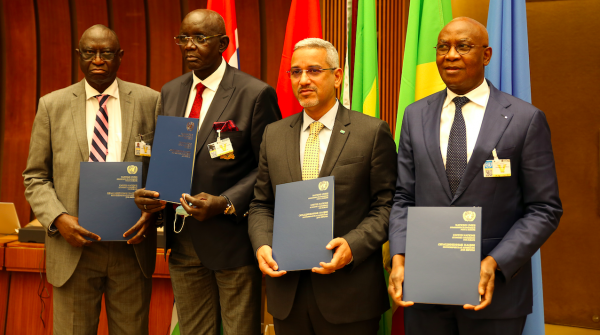 Senegal, Gambia, Guinea Bissau and Mauritania have signed a joint declaration to advance transboundary cooperation on the shared use of the Senegal-Mauritanian Aquifer Basin (SMAB).

The 19 September declaration was signed at the Palace of Nations in Geneva during the 9th session of the meeting of parties to the Convention on the Protection and Use of Transboundary Watercourses and International Lakes (Helsinki Convention) hosted by UNECE.

In terms of the agreement, a permanent mechanism will be established for the cooperative management of the aquifer system, including both a legal and an institutional framework for cooperation. The work of the four countries has been supported since 2019 by United Nations Economic Commission for Europe (UNECE), the Geneva Water Hub, the International Groundwater Resources Assessment Centre.

Switzerland has been accepted as a neutral facilitator in the dialogue, having launched the "Blue Peace Initiative" in 2010, supporting stakeholders to come together to invest in shared water resources to promote peace. It includes the launching of the Global High-Level Panel on Water and Peace and the Global Observatory on Water and Peace, of which the Geneva Water Hub is the Secretariat.

In West Africa, a Regional Working Group has been operational since May 2020, preparing the ground for the agreement on the SMAB, meeting regularly and supported by situation assessments on data and existing implementation capacity. The SMAB agreement also builds on years of existing transboundary cooperation between the countries on surface waters through the OMVG and the OMVS.

The SMAB covers an area of some 335 000 km ², underlying much of the territory of Senegal, Guinea Bissau and Mauritania as well as the whole territory of the Gambia. Some 15 million people - 80 Percent of the population of the countries involved – depend on groundwater for their livelihoods and domestic needs.