A task force from the International Atomic Energy Agency (IAEA) arrived in Japan in mid-February to review the safety of planned releases of wastewater from the Fukushima Daiichi nuclear power station.

The reactor was damaged in 2011 following a tsunami which caused a meltdown of three of the plant’s reactors. The water used to cool the reactors has been stored in some 1000 tanks on site. Storage space is running out and the tanks need to be emptied in order for the plant to be decommissioned.  The tanks occupy a large surface area and are currently reaching their full storage capacity.

In April 2021 the plant operator, the Tokyo Electric Power Company (TEPCO), announced plans to pre-treat this water and gradually release it into the sea in diluted form from the spring of 2022 onwards.

TEPCO is confident that the filtration process to be used will remove all radioactive substance from the water, with the exception of the element Tritium, which is a radioactive isotope of hydrogen.

Nevertheless, fishing communities in South Korea have protested against the release of the wastewater, expressing worry that the water would contaminate the seas and threaten the fishing industry,

Similarly, the Commonwealth of the Northern Mariana Islands urged TEPCO to investigate alternative options such as long-term storage. The Commonwealth is concerned that the seas, in the south Pacific, have already been contaminated through nuclear testing and should not be exposed to further pollution.

In 2020, Greenpeace had stated that the treated water still contains radioactive substances other than Tritium and should be treated a second time.

The role of the IAEA task force is to independently verify that the water is released in safe manner. 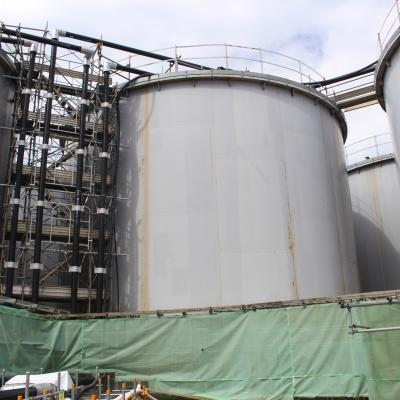 The Fukushima nuclear plant is running out of space to store radioactive water following its destruction in the 2011 earthquake and tsunami. Plans by owners TEPCOto begin dischargi...