Entire communities across three countries in South America are struggling with extremely low levels in the Parana River. Second in size only to the Amazon River and crossing Brazil, Paraguay and Argentina, the Parana is at its lowest level since 1944.

The impact is being felt in all three countries as Brazil continues to experience its worst drought in 91 years. The historic low water level has hindered grain transportation which used the waterway, has triggered a rise in wildfires, and has damaged entire ecosystems.

In the areas surrounding the Brazilian part of the river, rainfall has halved in the past 30 years and there are fears that this is a trend that will only intensify as a result of climate change and global warming.

This is having a significant economic impact in the region’s economy with billions of dollars in losses.

In fact, the region is one of the world’s largest producers of soybean and maize, but the ongoing drought has been having an impact not only on yields but also on the ability to transport the grains.  Brazilian authorities estimate that soybean yield could drop as much as 38 percent due to the drought.

Another sector struggling with the drought is fisheries and fishery-related tourism, due not just to the vast arid areas where the river once flowed, but due also to the quick changes in the regions ecosystem.

Forecasts predict that, for the foreseeable future, the region will see below-normal levels of precipitation, which means that the reversal of the situation and overcoming the crisis is something which is not yet on the horizon.

Cargo ships have been unable to transport goods due to the shallowness of the basin, which has also sparked concerns amongst local communities who rely on the Parana River for drin... 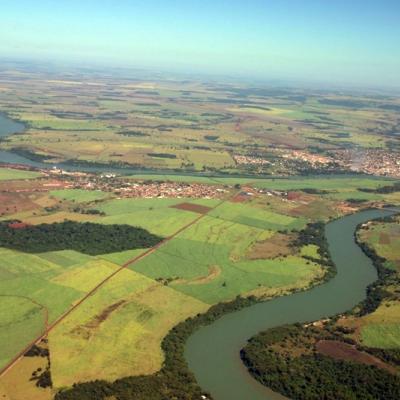