Nearly A Third of Istanbul's Fresh Water Supply Under Threat

7 May 2021 by The Water Diplomat
Istanbul 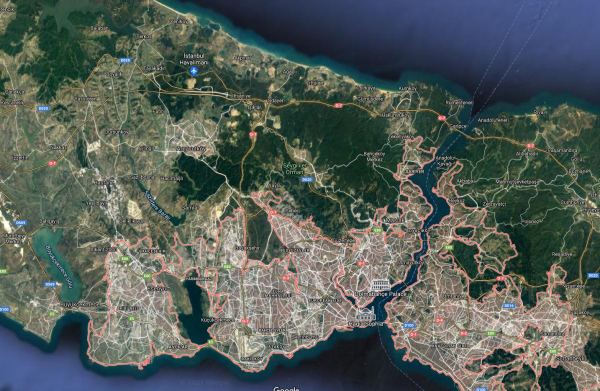 Quoting a number of sources from the banks concerned, the report identifies the commitments of the UN's Principles for Responsible Banking framework as a hindrance to the investment, which threatens to destroy a marine ecosystem and resources that supply nearly one third of the city's fresh water.

The 25-mile stretch of waterway connecting the Sea of Marmara to the Black Sea would run to the west of Istanbul, slicing through the Terkos Lake, Sazlidere stream and reservoir and Küçükçekmece lagoon.

Six Turkish banks have signed up to the UN framework, designed to ensure that "signatory banks’ strategy and practice align with the vision society has set out for its future in the Sustainable Development Goals and the Paris Climate Agreement". Its principles include a commitment to reduce the negative impacts on, and managing the risks to, people and the environment resulting from activities, products and services.

"This is one of those white elephants," said one former senior banker who spoke to Reuters on condition of anonymity. "Other than land price speculation, it is hard to see any value in it," he added.

The canal plan is broadly unpopular in Istanbul, with the city's opposition mayor, Ekrem Imamoglu, a chief critic. He has described it as "one of the biggest risks this city has had in its entire history", calling for the money to be spent instead on public transport, water supply and other measures.

The Reuters report suggests that the absence of Turkish banks in the canal deal increases the likelihood of state and foreign financing, and quotes Erdogan spokesman and adviser, Ibrahim Kalin, as saying there is already interest in the bidding that would be open to all, including Turkish, European, American and Chinese firms. "It's a profitable project ... and we are positive it will move forward," said Kalin.

Wasteful Irrigation Methods As A Cause Of Turkey Water Crisis