Logistics and the role of inland waterways in reducing carbon footprint 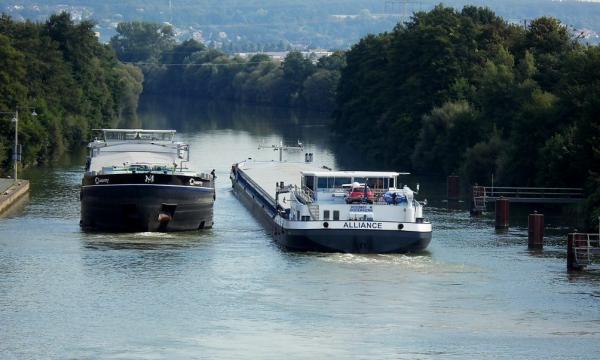 In an article published by The Water Diplomat, Maritime Analyst Nadir Mumtaz analyses the potential role of Inland Waterway Transport (IWT) in achieving ‘net zero’ greenhouse gas emissions by 2050. Both the environmental performance and the cost of inland waterways in comparison with rail and road transport show large differences, which favour IWT on both counts.

The European IWT network comprises 23,506 km, whereby the Rhine is a key transport network which transports 80% of the 223 million tonnes of cargo transported by ship in Germany. Paradoxically, recent low water levels of the Rhine have induced a switch to higher emissions forms of transport such as road and rail. Similarly, the Yangtze Kiang in China has a length of 2,000 km is a key navigational channel for the Chinese economy. The port of London Authority, for its part, features an envisaged post Brexit expansion of the Port of Tilbury which will help offset the carbon footprint of the UK’s international transport by road and rail.  In India, the Inland Waterways Authority of India oversees a network of 14,544 km of navigation channels and has a renewed focus on waterways as a supplementary and eco-friendly form of transport.  The Russian Federation has 102,000 km of inland waterways featuring 58 ports which are rail accessed. The Federation aims to redistribute cargo flows from land-based transport to IWT, reducing the overall environmental burden of the transport industry. In the United States, the Mississippi River is a 2,340 km long river which is a key transport artery that is now facing unprecedently low water levels, forcing restrictions on certain kinds of cargo transport such as soy, oil and coal.

IWT has distinct advantages over road transport in terms of greenhouse gas emissions: recent European data indicates that emissions from a bulk vessel in IWT is only 10 % of that of a truck for CO₂ emissions, 13 % of a truck for Nitrogen Oxides (NOₓ), and 50 % of a truck for particulate matter (PM)2. Data from the United States indicate that CO2 emissions per unit turnover of barges are just 8 % of highway transport’s NOₓ emissions. In addition, the cost comparison of these modes of transport also shows significant advantages for IWT: according to a study conducted by RITES, in India alone one litre of fuel moves 24 tonne-km on road, 95 tonne-km on rail and 215 tonne-km on inland waterways.