Water, Climate Change and Cooperation in the Aral Sea Basin 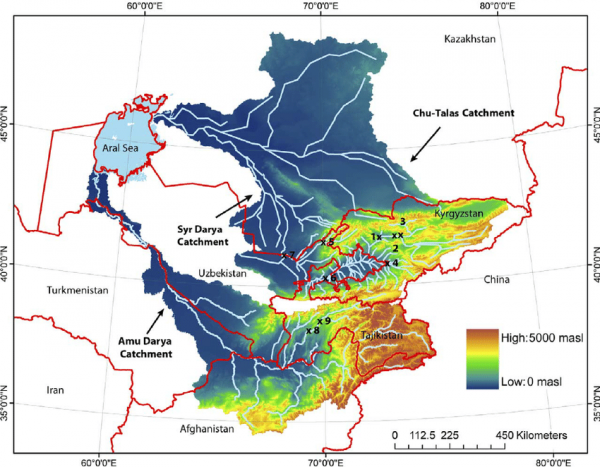 At Cairo Water Week, Soltan Rahimzoda, in his capacity as chair of the Executive Committee of the International Fund for saving the Aral Sea, summarised some of the key contemporary issues in transboundary cooperation in the Aral Sea Basin.  This falls within the theme of water for cooperation that has been identified as one of the key issues for discussion during the UN Water Conference in March 2023. Tajikistan regards water cooperation as one of the most important tools for transboundary water management.

The Central Asian region is comprised of Kazakhstan, Kyrgyzstan, Tajikistan, Turkmenistan, Uzbekistan and Afghanistan. The countries of the region are united by two great rivers: the Amu Darya and the Syr Darya, which provide water for household uses, agriculture and other economic sectors. The Amu Darya arises predominantly in the mountains of Tajikistan and to a lesser extent in Afghanistan and flows in a north westerly direction through Turkmenistan and Uzbekistan to the Aral Sea. Similarly, the Syr Darya originates in Kyrgyzstan and flows westwards between Kazakhstan and Uzbekhistan to the Aral Sea. In terms of water formation, the lion’s share of the waters of the basin, amounting to 64 km³ per year, originate in the territory of Tajikistan. Kyrgyzstan contributes 29.3 km³ per year, and thus more than 85% of the water resources of the basin originate in these two countries and Uzbekhistan and Afghanistan contribute 8.8 km ³ and 6.28 km³ respectively while Kazachstan and Turkmenistan contribute 4.5 km³ and 2.8 km³.  By contrast, more than 80% of the water resources are being used by downstream countries: for example, Uzbekistan is the largest recipient of water allocations at 71.7 km³/a, followed by Turkmenistan which receives 27.1 km³, and Kazachstan which receives 15.3km³.  With such discrepancies in water availability and utilisation between the countries, transboundary cooperation became a key vehicle for water management, and after the independence of the basin states in 1992, one of the first actions that took place is the signing of an agreement for the joint management of the water resources of the basin.

The water resources of the region have been strongly affected by climate change: much of the water originates from glaciers, and these have lost a large amount of their volume in the 20th century. During the second half of the 20th century, the glacial resources of Central Asia declined to less than a third of the original volume, and they continue to decline by an average of 0,6% to 0,8% per year in terms of surface area and 0,1% on average in total volume. As a result, there has been a decline in runoff in the Amu Darya River Basin by 0,51km³ between 2001 and 2018. For the Aral Sea Basin as a whole, the runoff reduction was 1.41km³ for the same period. It is estimated that under harsh climate scenario’s, the flow of the Syr Darya River could be reduced by 15-30% while the Amu Darya could witness a reduction of between 21-40%. In the meantime, the water demand in the region is increasing at a rate of approximately 1% per annum, amounting to 30% by 2050.  Per capita water availability has declined from more than 8,000m³/c/a in the 1960’s to less than 2,000m³/c/a currently.

In terms of water availability, a lot can be done to improve water use efficiency: the utilisation of water resources in Central Asia is one of the most wasteful in the world: the current average utilisation of water per hectare for irrigation is 11,800 m³/ha, which is 2-3 times higher than water utilisation in other parts of the world. Studies have shown that only 30% of the water is used productively, due to the use of outdated irrigation infrastructure and technique such as furrow irrigation. Possible responses include increasing the capacity of storage infrastructure, the modernisation of irrigation infrastructure, the introduction of water demand management, improvements in water metering and other monitoring systems, the introduction of economic and financial incentives, and most importantly strengthening regional cooperation.

The countries of the region are strongly interconnected at the level of infrastructure: water energy, transport, etc. Much benefit is to be gained from cooperation: a recent report entitled ‘Rethinking Water in Central Asia’ came to the conclusion that improved water cooperation could yield an extra U.S. $ 4.5 billion in economic benefits for the region.   Recent changes in political economic and social dynamics have improved regional cooperation: thus, the heads of state meet together each year to strengthen regional cooperation. In the context of climate change it is recognised that intensified regional cooperation will be needed to achieve regional water security in the future.

In terms of the fourth edition f the Aral Sea Basin Programme, a vision for a regional programme on sustainable development to 2030 has been developed. In 2018 the countries presented a joint statement regarding the International Fund for Saving the Aral Sea, and joint statements of the heads of state have been made in 2021 and 2022. For the future, a roadmap has been developed for regional cooperation in the period from 2022 to 2024, and a vision has been developed for a regional “Green Agenda” for Central Asia. The next meeting of the International Fund for Saving the Aral Sea is due in 2023