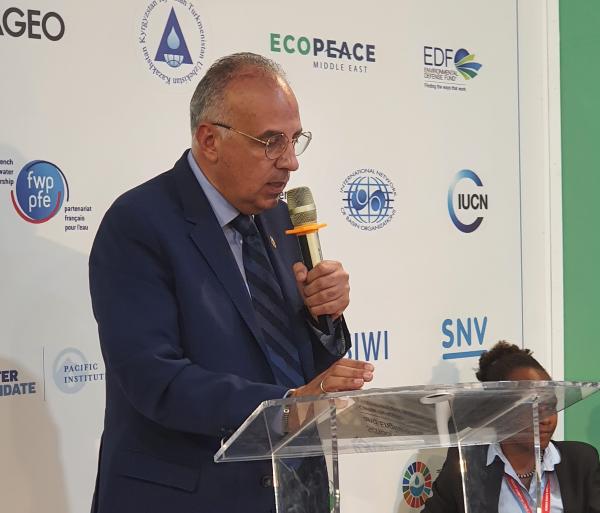 On the 14th of November, at COP 27, the Food And Agriculture Organisation of the United Nations (FAO) hosted a high-level meeting on the Water Energy Food Nexus. According to Cindy McCain, the U.S. Ambassador to the FAO, we find ourselves in urgent times with ongoing armed conflicts, especially the war in Ukraine and its impact on food prices. Covid 19 and climate change continue to strain global food security. In this context continued research and innovation on climate smart agriculture is important. At last year’s COP, the United States, together with the UAE, launched the Agriculture Innovation Mission for Climate (AIM for Climate) alongside 31 countries and 48 non-governmental organisations. AIM for Climate seeks to increase resilience in food production by mobilising $ 1 billion in investments that will underpin transformative action in the agricultural sector.

Engineer Shourouq Abdel Ghani from the Ministry of Energy and Mineral Resources of Jordan emphasised that integration across the water, food, and energy nexus is important to achieve sustainable development. Jordan imports about 90% of its energy, and water accounts for some 13% of national energy consumption. Reducing energy consumption in the water sector is therefore an important objective. In addition, the water food energy nexus is a key government strategy, which requires long term planning to achieve, but also a range of individual initiatives such as the establishment of a joint committee working on both water and energy which is currently working to reduce the energy needs of the water sector. Furthermore, renewable energy plays a very important role in the national strategy: currently 29% of energy is produced sustainably and Jordan seeks to increase this to 50% over time. Dr. Jihad Al Mohamid, the Director General of Water and Irrigation, stated that the Ministry has developed a new water strategy covering the period from 2022 to 2040 that focuses on developing a resilient sector which embraces social, economic and environmental aspects and integrates water security across different sectors. Priorities include achieving universal access to water and sanitation, in addition to mitigation and adaptation actions in the field of climate change. The strategy stresses an integrated approach which protects existing water resources while allocating water equitably over all social, economic and environmental needs.  Current challenges, though, are vast: Jordan is already utilising 90% of its available freshwater resources, and currently the effects of climate change include extreme heat, irregular precipitation and the loss of biodiversity. Within the overall water strategy, Jordan would also like to achieve water security for refugees, given the large number of refugees that the country has: for instance, Jordan has more than 2.1 million Palestinian refugees and some 640,000 refugees from Syria.

Assistant Minister for Climate Change and Energy of Australia Jenny Mc Allister stated that Australia has a new government which has updated the country’s climate strategy for 2030. This has been put into legislation in the form of the Climate Act which came into effect in September 2022, thus anchoring climate change as a key focus of the government strategy. Part of the background to this is that in the 2000’s, Australia experienced the ‘Millennium Drought’, which is said to be the worst drought that the continent has experienced since European settlement. This event sent a clear signal to the Australia government about climate change and water security. Because it was a drought, the event set in motion a lot of discussion about interactions between energy, climate, agriculture and water and a lot has been done in the last twenty years both in the field of policy development and the deployment of technology. For instance, many urban water utilities are using nature-based solutions to reduce energy use and reduce carbon emissions, reduce the consumption of chemicals, and introduce a low-cost option for wastewater treatment in a way that is also is positive for downstream health. Australian water treatment plants are also thinking about the circular economy, using a variety of sources of organic materials to produce bioenergy. Lastly, the drought resulted in a host of measures aimed at increasing water use efficiency through a water efficiency labelling and standards scheme which is estimated to have saved 1321 gigalitres of water since the scheme commenced in 2005. It is estimated that this scheme also saved 28.1 MT of CO₂ equivalent saved since 2005. This work which integrated water and climate is very important and Australia is open to partnerships in this field.

Lifeng Li, director of the land and water division at FAO, emphasised that we need to think about climate, water, agriculture and the environment together: from the perspective of earth itself water is climate and climate is water. This past year has featured extreme droughts as well as severe floods, and from an agricultural perspective, climate change has a massive impact on water. 95% of global food production is produced on land, and this food has a very large water footprint: one ton of rice for instance requires about 1,3 tons of water to produce, and this has an energy footprint also of between 4 and 6 tons of CO₂ equivalent per ton produced.         2,5 billion people do not have access to electricity and 2,3 billion people live in areas which are water stressed. Since the 1970’s, we have lost 83% of our aquatic biodiversity which is driven to a large extent by agricultural practices. Therefore, these issues are all connected, and FAO strongly recommends an integrated approach that brings all of these elements together. In this context, FAO recommends that countries develop national water roadmaps which integrate all these aspects into a single vision for water resources development.