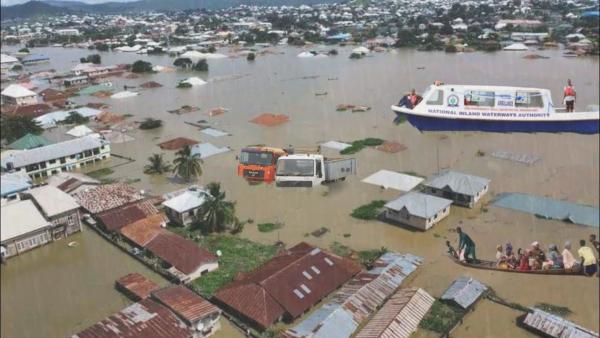 Widespread flooding in Nigeria has led to the displacement of more than 1.4 million people, left 90,000 homes under water and led to the deaths of more than 500 people. The floods have affected 27 of Nigeria’s 36 states from the confluence of the Niger and Benue rivers to the Bayelsa National Forest at the head of the Niger delta. In addition, it is estimated that some 70,566 hectares of farmland have been completely inundated. The Nigerian federal government has described the situation as being ‘beyond its control’. According to NASA’s earth observatory, the rainy season, which normally occurs from April to October, has been exceptionally harsh this year, and the floods are the worst on record since 2012.  The floods started in Yobe in July and Jigawa state in August before spreading to other states in September.   In September, reportedly opened overflow spillways at Lagdo dam to reduce pressure on the dam from rising waters.

However the Nigerian news outlet Punch argues that, as a result of feasibility studies conducted in 1982 for the Lagdo dam, Cameroon urged its neighbour Nigeria to build a buffer dam downstream, which the Nigerian government had initially agreed to do. This downstream dam, known as the Dasin Hausa dam, was to be located downstream inside Nigeria and was to have a capacity sufficient to capture excess water released from the Lagdo dam. In 2015, three years after destructive floods which took place in 2012, the House of Representatives discussed continuing the construction of the envisaged Dasin Hausa dam to prevent loss of life from flowing. However, this dam has never been completed. In a similar vein, the Guardian Nigeria questions disaster existing response mechanisms including awareness raising, the allocation of land for development in designated floodplains, the low levels of funding for disaster mitigation, the centralisation of decisions on flood protection and disaster response.