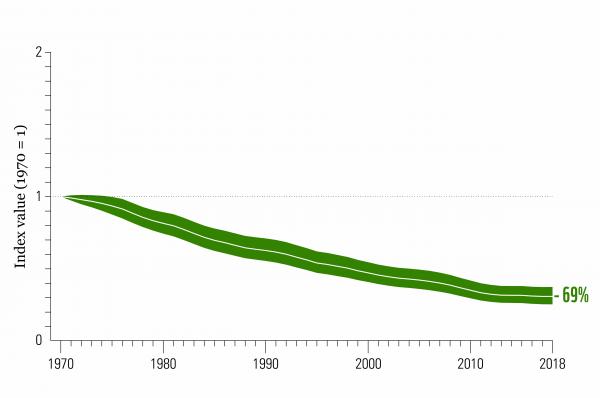 The World Wildlife Fund and the Zoological Society of London have released the latest edition of the Living Planet Report (LPR), which indicates that the world has witnessed an average decline in vertebrate species numbers of 69% since 1970.  The LPR is based on a review of the most comprehensive database on vertebrate species to date: 89 authors compiled evidence from data samples of almost 32,000 populations of 5,230 species from across the world to assemble the LPR. The decline in species numbers cannot be attributed to a single determinant: the authors point to a combination of changes in land and sea use, the overexploitation of plants and animals, climate change, pollution and invasive species.  The losses in species numbers vary across species as well as across geographical regions: for instance, Latin America shows the greatest decline in average population numbers with a decline of 94% and Africa experienced a decline of 66%, as against 55% for the Asia-Pacific region, 20% for North America and 18% for Europe.

Amongst ecosystems, freshwater species decline was the highest at 83%. These high losses represent a threat to ecosystem integrity, ecosystem functions, and resilience to climate change. Freshwater availability is interrelated with ecosystem integrity and plant cover: deforestation and land denudation lead to warmer, drier local climates, with higher rates of evaporation, increasing the number of droughts, and reducing rainfall. This undermines rainfed agriculture, which still produces 60% of global food. Halting deforestation, therefore, contributes to the integrity of the water cycle and increases water security. In freshwater systems, dams and other infrastructure fragment ecosystems and reduce habitat for aquatic species. The free flow of nutrients and minerals as well as the movement of aquatic species is essential to the functioning of aquatic ecosystems.

Currently, however, only 37% of rivers longer than1,000 km remains free flowing along their entire length. Freshwater habitats need to be reconnected by building fish passages and removing dams: attempts to do so have resulted in enormous increases of fish populations.