Water Management in Africa: Hydro-diplomacy is the ultimate solution to avoid military conflicts 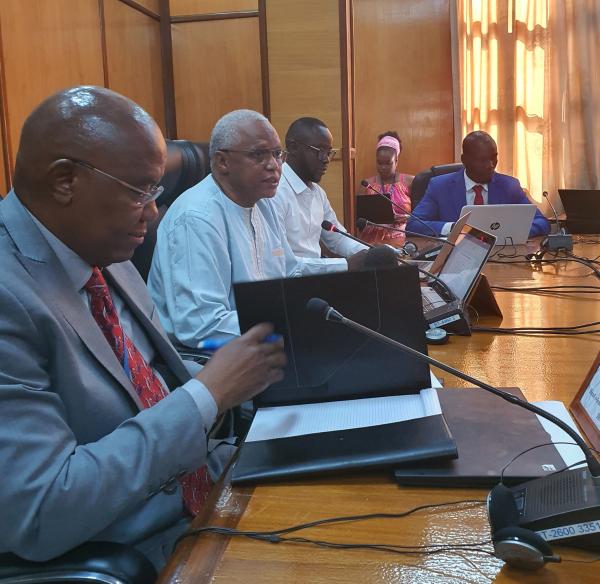 Africa has a total of 61 transboundary river basins, which implies that water management in Africa is inseparably bound to transboundary cooperation. Transboundary waters are often a source of conflict between riparian States, which means that water needs to be managed holistically and even diplomatically to avoid armed conflicts - hence the concept of ‘hydro diplomacy’. In order to train journalists from West Africa to cover water issues, as well as to boost the coverage of water issues in the run op to the UN Water Conference in New York in March 2023, The Water Diplomat partnered with Africa 21 and a range of international experts from UN bodies and international water organisations to organise a workshop from August 15 to 19 in Dakar for journalists specialising in sustainable development. The theme of this international workshop focused on water issues in Africa.

With 97 registered journalists from West Africa , of which 19 were present in Dakar, the workshop  took place in hybrid mode at the African Institute for Economic Development and Planning (IDEP). Interventions spanned a broad range of water related issues, ranging from the Human Right to Water, presented by Tunisian legal expert Moez Allaoui – advisor to the Tunisian national water utility – SONEDE - to transboundary water management, presented by Dr Komlan Sangbana, West and Central Africa focal point of the UNECE Water Conventions, and an overview of the outcomes of the 9th World Water Forum, presented by the scientific adviser of the said forum, the hydrologist Dr Boubacar Barry, and many other themes. Particular emphasis was placed on the transboundary management of the rivers on the continent during this workshop. And this for many reasons: because hydro-diplomacy gathers around the table -within the framework of a new governance-, all the actors linked to water management. Its objective is to promote economic and social benefits for transboundary basins and to work to avoid the militarization of water-related conflicts.

“Water in the service of peace”

With more than forty years of experience in water management across the continent and around the world, Dr. Boubacar Barry underlined the importance of journalists in covering water issues but also of connecting journalists to the relevant specialists, to help transmit the ‘voice of water’ across the continent. Having first recalled the agreement in the context of the 9th World Water Forum on a Blue Deal on “Water Security for Peace and Development”, Dr Barry emphasized the central role of water for all aspects of development and emphasized that "water must be a force for cohesion rather than a source of conflict between countries”. In short, he argued, "water must be in the service of peace rather than peace being in the service of water". Highlighting the example of the Senegalo-Mauritanian conflict of 1989 on access to- and control of the waters of the Senegal River, the hydrologist insisted on the leading role played by the Organization for the Development of the Senegal River (OMVS) in this crisis. Indeed, the OMVS is an intergovernmental development organisation which was created on March 11th, 1972, in Nouakchott, by Mali, Mauritania and Senegal, with a view to managing the watershed of the Senegal River, a basin which extends over an area of ​​289 000 km2; Guinea Conakry joined the organization in 2006.

The OMVS: an export model of hydrodiplomacy

With a length of 1,750 km, the Senegal River, which has its source in Guinea at an altitude of 750 meters, waters Mali, then Mauritania and Senegal, while serving as a border between these two countries, before flowing into the Atlantic Ocean in Saint-Louis in the north of Senegal. Conscious of the importance of the sacred union around this natural resource and animated by a will cemented by the ideals of solidarity, sharing, equity and culture of peace, these four countries have decided to link their destiny around this watercourse, placing their trust in the OMVS for the management of this cross-border river and its infrastructures which serve the neighboring countries. According to Dr Barry, the success of the OMVS in its management of the Senegal River can be explained by the fact that in terms of the management of transboundary border watercourses, "States must imperatively give up part of their sovereignty in favor of the general interest, which was the case in the Senegal River Basin". This bravery and historical success earned the OMVS the Hassan II Water Prize at the 9th World Water Forum held in Dakar from March 21 to 26. According to Dr. Barry, the OMVS actors intend to form a delegation to go to East Africa in order to present the example of the 'OMVS, to Ethiopia and Egypt. Indeed, the management of the Blue Nile has been the subject of intense tension between the two countries for several years, following the construction of the Great Renaissance Dam by Ethiopia on this river. This hydroelectric dam, the largest in Africa, will be able to store around 80% of the waters of the Nile. Even if the production of electricity does not consume water, storing such a large quantity of Nile water will undoubtedly have serious consequences for food and nutritional security for Egypt.

Hydro-diplomacy, the ‘other way’ for water

Dr Barry was asked the question how the example of the OMVS could be applied in East Africa, on the issue around the Blue Nile, between Egypt and Ethiopia, whose realities are not the same as in West Africa. Indeed, Ethiopia, on the one hand, affirms that the hydroelectric energy produced by the dam is vital to meet the energy needs of its 110 million inhabitants, while Egypt on the other hand depends on this river for about 97% of its irrigation and drinking water and considers the Ethiopian dam a threat to its water supply.

In response, Dr. Boubacar simply indicated that they will ‘show them the way to the water’, in the sense that water itself does not recognise or respect national boundaries. And since the waters know no borders, the management of this natural resource that man cannot manufacture must in no way be linked to our administrative borders. Because, they flow far beyond these.

But what exactly is hydro diplomacy?

Indeed, it was Fadi Georges Comair who was honorary president of the Mediterranean Network of Basin Organizations (Remob), who coined this term in the early 1990s. It was in an interview with our colleagues from the French newspaper Release in 2017, that the director general of hydraulic resources at the Ministry of Energy and Water of Lebanon indicated that "in the negotiations on the sharing of water from cross-border basins in the Middle East in which I participated, I quickly realized that it was neither just an engineer's job, nor just a diplomat's job. I wanted to find a concept that could promote the culture of dialogue, with the equitable sharing of water between riparian countries... this requires political, diplomatic and financial synergies, efforts from all riparian countries to preserve this essential resource. ". In summary, the hydraulic diplomat of the American Academy of Water, affirms that it is about "a concept which combines the diplomatic work with the expertise in planning of hydraulic projects, via the creation of a regional cooperation”. The aim is to create a dynamic of economic development at the level of the transboundary basin to find an answer to the problems that very often arise from water.

Faced with the issue of this natural resource, which has become a global challenge, the Africa 21 and Water Diplomat team, aware that such a challenge can only be met through a collective response, realised that men and women of the media are well placed to inform, educate and sensitize the general public on water issues. Going forward, the platform for mainstreaming water news is being built through a series of regional workshops, supporting the public debate on water on the Road to New York.