2 Sep 2022 by The Water Diplomat
By Tobias Schmitz 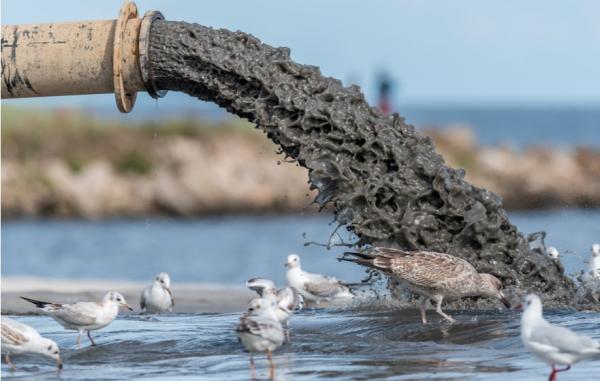 In August, members of the European Parliament have written to the European Commission warning that the United Kingdom is threatening health, marine life and fishing by releasing raw sewage into the Channel and the North Sea. In May 2022, statistics released by the UK department of Environment Food and Rural Affairs showed a rapid annual increase in both the number and the duration of sewage spill events across the UK since 2016. While in 2016, 12,637 sewage spills were recorded by the Event Duration Monitoring (EDM), the number grew rapidly to 146, 930 spills in 2018 and 403, 3765 in 2020. There was, however, a reduction in sewage incidents to 372,533 spills in 2021 relative to the previous year. In response to a public outcry in the UK about pollution levels and the deteriorating condition of the coastal environment, the government announced a public consultation on a Storm Overflow Reduction Plan which was to be implemented from September 2020 onwards. This plan aims to reduce raw sewage overflows by 40% by 2040.

Water UK, which represents the UK water industry, has announced that they plan to invest more that £ 3 billion between 2020 and 2025 to improve overflows. In 2021 a lengthy parliamentary controversy over sewage disposal led to the passing of an amendment to the Environment Act which imposes a legal duty on both government and water companies to demonstrate progressive reduction in pollution and take ‘all reasonable steps’ to avoid using combined sewer overflows. Until now, water companies have been permitted to release sewage into waters after certain weather events such as prolonged periods of rain.

The European MEPs are accusing UK companies of abandoning EU commitments on water management such as the EU Water Framework Directive. Nevertheless, they state, the UK is still bound by UN Conventions on protecting shared waters.