An estimated 9 out of 10 children in the Middle East and North Africa (MENA) region are living in areas with high or extremely high water stress, according to a new UNICEF report.

“Running dry: the impact of water scarcity on children in the Middle East and North Africa” analyses both the drivers of water scarcity in the region and the impacts on children. Eleven of the 17 most water stressed countries in the world are located in the MENA region. An estimated 66 million people in the region lack access to safely managed sanitation, with untreated or partially treated wastewater also contaminating already limited water resources. There is insufficient water supply relative to demand and the direct impacts include limited access to safe drinking water and/or water for personal and domestic hygiene.

80% of all diseases are water-related and access to safely managed water and sanitation is crucial.  Regular exposure to harmful bacteria and viruses results most often typically in diarrhoea. Regular bouts of diarrhoea in children can lead to malnutrition as the absorption of water and key minerals into the body is inhibited.

The MENA region is home to some 6 Percent of the world’s population, but the region holds only 1.4 Percent of the world’s freshwater. Agriculture accounts for a high proportion of water demand: currently 80 Percent of current water utilisation in the MENA region is for agriculture, considerably higher than the global average of 70 Percent. In many countries in the region, groundwater is being used above the natural rate of recharge, i.e. water is being used at unsustainable rates. Population growth has also contributed to increasing water demand in the region, particularly in towns and cities, where water demand is highly concentrated geographically.

In most MENA countries, per capita water availability has declined to less than 33 Percent of the water available in the 1970’s as a result of population growth: from an average for the region of 2400m³/c/a in 1970 to 700 m³/c/a currently.  Many countries in the MENA region are dependent on transboundary waters: 60 Percent of the water resources of the region originate from outside the region. Several countries, especially Egypt, Iraq, Jordan and Syria, are dependent on large quantities of surface water from upstream countries and have been affected by dam building by upstream states as well as by the effects of climate change. 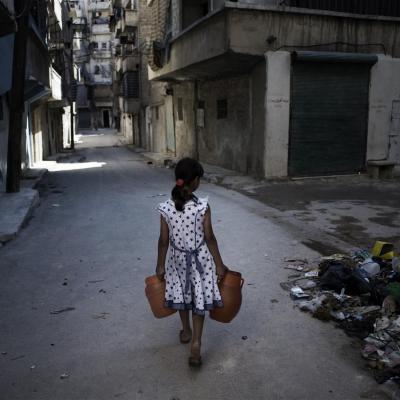 UNICEF publishes the third in its series of reports on the devastating impacts on children caused when water and sanitation infrastructure is compromised during conflict. Urges adh...