Highest Figures In A Decade With Asia Worst Hit

28 May 2021 by The Water Diplomat
Geneva, Switzerland 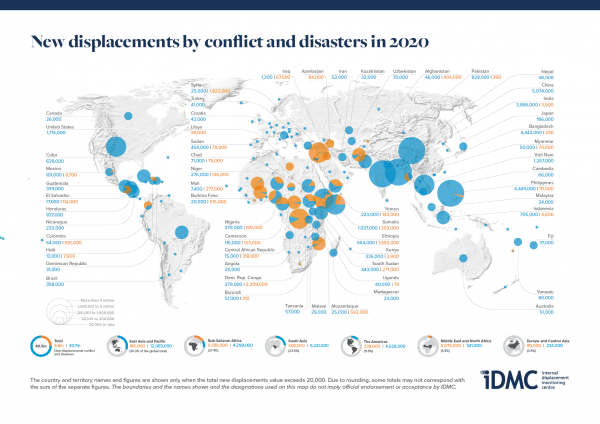 2020 was the worst year on record for internal displacements, with 3 quarters of them related to extreme weather such as droughts, floods and storms, according to the Internal Displacement Monitoring Centre's (IDMC) latest report.

This year's Global Report on Internal Displacement (GRID) focused on climate change, noting that "rising temperatures are increasing the intensity and frequency of weather-related hazards".

Alexandra Bilak, director of the IDMC said: "Disaster, particularly weather-related, triggered 3 times more displacements than conflict and violence did in 2020."

The report identifies regional variations in the reasons for displacement, with most new displacement triggered by weather-related disasters in 2020 being recorded in East Asia and the Pacific as well as South Asia.

It also cites examples of critical thresholds for disaster displacement, where increasing environmental stress has combined with structural inequalities to leave households with no choice but to move.

It also highlights the need for better data on displacement associated with "slow-onset events including drought, coastal erosion, sea level rise, salinisation, glacial retreat and permafrost melt, and to understand how these phenomena interact with sudden-onset hazards to trigger displacement".

However, Bilak stressed in a video address that climate change is not the only factor driving displacement, identifying many other "interconnected stressors" such as chronic poverty and inequality, political instability and exclusion.

"We can learn a lot from countries investing in sustainable, locally owned solutions," she said.

The IDMC presents Fiji as one such example. Given its susceptibility to hazards such as sea level rise, flooding and cyclones, the country is reviewing the permanent relocation of infrastructure and whole communities. Official assessments suggest more than 80 villages may need to be relocated, says the report.

In another video address, Saleemul Huq, director for the International Centre for Climate Change and Development (ICCCAD) described work ongoing in Bangladesh with migrants from the low-lying coastal zones susceptible to flooding, who tend to converge on capital Dhaka. Outlining the development of around 20 "climate-resilient, migrant-friendly towns", each one currently with 500,000 to 1 million inhabitants, he said: "We are looking at ways in which we can help them to attract migrants to the tune of maybe 500,000 to 1 million people [each] over the next decade."

ICCCAD is looking at developing job and economic opportunities for migrants in those towns, as well as educational, health and living opportunities "to enable them to come to these towns and settle there, instead of ending up in the slums of Dhaka city," said Huq.

Aid workers are scrambling to help an estimated 175,000 people affected by Cyclone Eloisewhich ripped through the south of Mozambique recently, causing major devastation in the cit...