Exploring The Non-market Value Of Water To Society: aquaNOW Audience 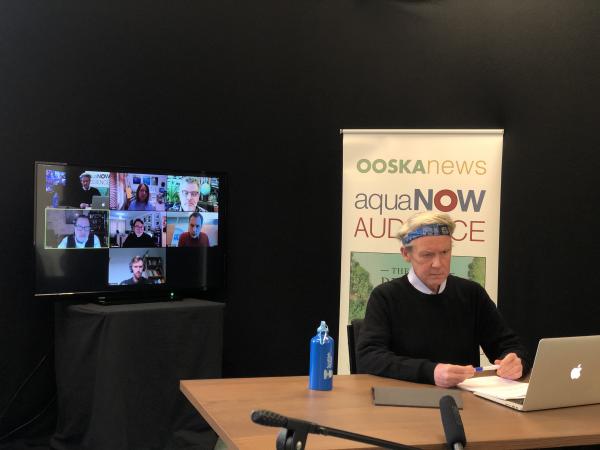 Water is essential for human life. For food, energy, our environment and ecosystems, playing a central role in our economies, from agriculture to energy production, and manufacturing to tourism.

But what about those vital Non-Market Values of Water? Artistic and Social? Human Peace? Health and Wellbeing? Spiritual and Philosophical?

MORE ABOUT OUR PANEL HERE!

“We don’t have dominion over the planet and its ecosystems, in fact we are part of that ecosystem and we depend on nature for everything that is important to us in life – socially and economically,” said hydrologist James Curran, continuing, “And we can’t run the planet. We’re actually very bad at running the planet. We should let mother nature get on with it.”

Curran, who is a former chair of the James Hutton Institute and currently serves on the board of the Green Purposes Company, was describing his view of a third outrage to add to Freud’s two great outrages of humankind’s self-perception, and kicking off a wide-ranging discussion of the “non-market value of water to society” in the aquaNOW Audience to mark World Water Day.

aquaNOW Audience Moderator David Duncan invited six panelists, including an academic, a man of the cloth and an artist, to explore the less obvious artistic, social, spiritual and philosophical values of water and the contribution they make to human peace, health and wellbeing.

Dismissing mind models that place economic benefit on an equal footing with social and environmental benefits, Curran described the economy as a social construct, arguing: “The economy is there to serve us.”

For Elliot Hurst, water researcher and Scotland, Hydro Nation PhD Scholar, the values of water are closely related to how we engage with it. Echoing the point made by Curran on the economy, he said: “Water values are something that we create and that we decide upon.” The native New Zealander, who grew up drinking rainwater and surrounded by the Te moana nui a Kiwa (the Pacific Ocean), called for nature-based solutions to current manmade problems, reflecting upon the way indigenous peoples have thought about water for centuries as a “connecting fluid that holds all life together”.

This analogy was lauded by thought-leader and podcaster from Denver, Colorado, Will Sarni, who often refers to water as “the glue of humanity”. Welcoming what he described as “a different conversation about water”, he said: “Unless we [as water experts] can connect with humanity on a very visceral level, it’s going to be an echo chamber.”

“What we’re talking about is the local nature of water,” said Sarni. “Unlike carbon, water is not fungible – it is local, it’s personal.” Describing developments over recent decades in his native New York City that embrace its connectivity to water as “incredibly powerful”, he went on to say that water connectivity can transform people and serve as a catalyst for changing public policy. “We have an abundance of water, but we mismanage it so much that we don’t have access to water in an equitable fashion,” he said, urging people to “embrace the arts and embrace connectivity” and arguing that “the non-economic value of water is our power to do better”.

Referencing the spiritual roots of human relationships with rivers as symbols of cleansing and purification, James Curran talked of how industrialisation caused many cities, such as this year’s COP26 host Glasgow, to turn their back on the rivers from which they grew. Through industrialisation “the common good had become a private good”.

Recent efforts to undo the industrial damage done to Scotland’s waterways is evident in the work of Scottish artist Lesley Banks, whose residency with Scottish Canals resulted not only in an impressive body of work, but also in a new personal relationship with manmade waterways. Having previously spent time painting the canals of Venice and Amsterdam, Banks pointed to long-standing historical links between artists and water, citing Monet, van Gogh, Turner and Hokusai as examples of how artists are drawn to water.

Banks described Scotland’s canals that were once “industrial, dirty and hard-working”, but have since been “gentrified” and are now used for tourism, walkers, joggers, cyclists and kayaking. Calling the transformation amazing, she spoke enthusiastically of people enjoying these well-used places, of a “tow-path etiquette” that encourages social greetings and interaction, adding: “There’s a real camaraderie … it’s peaceful, it’s flat, you can’t get lost … it’s just this real asset to the community.”

This local perspective on water values was a common thread in the contributions made by all the panellists, who each came to the discussion with individual experiences from different parts of the world.

Rev Len Abrams is a civil engineer and water conservationist from Kenya, who was ordained as a Church of England priest in 2014. In his early work in South Africa during the apartheid era, he witnessed how water is an area of conflict, power and deprivation. While recognising the symbolic and spiritual significance of water across cultures, he stressed the significance of water values in everyday life, saying: “From a living faith perspective [the value of water] has to be real in how that impacts people’s lives,” continuing, “Disparity in water access is one of the biggest unseen travesties,” and arguing that the value of water can’t be dissociated from a whole range of other inequities globally.

It is in this key area of water as a source of conflict and inequity that Jean Willemin of the Geneva Water Hub has seen important developments that demonstrate how water can also serve as an instrument for peace. He cited the Senegal River Basin Development Organisation (OMVS), set up in the 1970s, as a positive example of promoting water as a common good. By merging the strategic interests of the four countries, Guinea, Mali, Mauritania and Senegal, the OMVS shares income derived from the basin from structures such as hydroelectric dams and water distribution assets. It is an approach that Willemin argues has led to strong integration among the four nations – integration that was put to the test in 1989 when a local conflict escalated into a confrontation between Senegal and Mauritania. Willemin: “All diplomatic doors were shut down. Only one remained open, and it was this basin agency, because water keeps on flowing and you have to manage it.”

The one-and-a-half hour aquaNOW Audience ended with the each of the panellists offering their personal wish list for how humanity should value water. Jean Willemin called on everyone to think at the local level on how to place greater value in cooperation to achieve sustainability, while scholar Elliot Hurst stressed the importance of water for playing and having fun. Rev Len Abrams’ wish list was relational, calling for the building of relations between humanity and nature, predicated on better relationships between people.

Artist Lesley Banks had one simple, personal plea. Listing the health benefits of water, she urged people to drink more of it. Following on from that, James Curran felt that all organisations that have anything to do with water should “have a Lesley … an embedded artist and communicator who can break down barriers and let people understand how important nature is to every single one of us”.

Finally, after calling on water practitioners to “challenge the status quo and have a bias for action,” Will Sarni agreed with Lesley’s sentiment on hydration, with the added proviso that we also “drink more whisky”.

STREAMING LIVE FROM 1.30 PM UK TIME TODAY! In celebration of World Water Day 2021 (22 March), The water Diplomat, in collaboration with Scotland, the Hydro Nation is hosting a l...