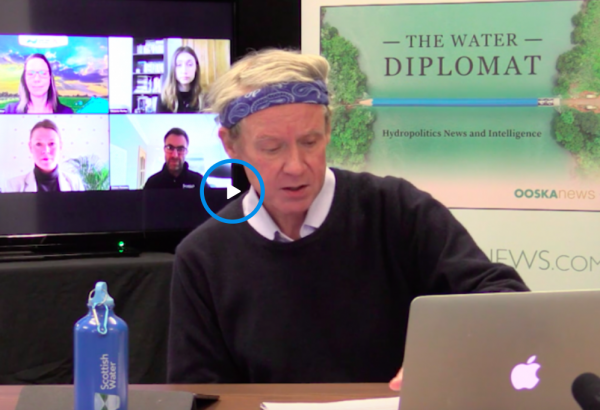 “We don’t want to wait until 2050 to achieve a net zero future. We want to bring that forward to 2030.” That was the clear message from Cate Lamb, COP26 High Level Climate Actions Lead, Water with the UNFCCC speaking at the online aquaNOW Audience on 11 March under the heading “Blue Thinking for a Green Economic Recovery”.

Lamb, who also serves as Global Director of the Carbon Disclosure Project (CDP) Water Security Initiative was one of five panelists talking to David Duncan of The water Diplomat about their hopes and expectations for the highly anticipated COP26 climate conference taking place this November in Glasgow, Scotland.

“I think it’s important to have a sense of ambition, a sense of optimism and outrage at the situation that we’re facing,” said Lamb, explaining that outrage at the lack of action to-date should be paired with optimism about what the future can hold “if we pay attention, if we mobilise the trillions, if we live with ambitious targets and goals and set our economy up to achieve them.”

Pointing out that resilience has been the poor relation to mitigation for too long, Lamb argued the need to raise the water resilience of four billion people worldwide, and observed that the largest 50 water suppliers in the world serve over one billion people.

The theme of resilience and adaptation was echoed by the other panelists. Speaking on behalf of Scotland’s national water utility, Simon Parsons, Director of Strategic Customer Service Planning at Scottish Water, stressed how dependent the utility is on a healthy environment in order to do its job effectively. Describing recent weather events in Scotland that strained the nation’s water infrastructure, he argued the need for a very different approach to dealing with changes that are already being seen, and commended the Scottish Environment Protection Agency (SEPA) for the achievements of its One Planet Prosperity initiative.

Staying in Scotland, panelist John Rathjen, leader of the Water Industry Team for the Scottish government, spoke of the country’s Hydro Nation initiative as a source of inspiration, saying: “One of the things that’s been really important about the Hydro Nation is listening to more voices.” Talking about the need for getting communities and individuals to speak up and engage, Rathjen urged organisations to act quickly and to look closely at how they can do more than merely comply and meet obligations, but instead maximise the value obtained from water resources. “Once given a target, powerful organisations can shift and be really productive,” he said.

From a scientific standpoint, PhD student Victoria Porley explained her research into simple, low-cost household-scale water treatment for off-grid, rural communities in developing countries using photocatalysis. Working with partners in India, she is examining how to leverage commonly used solar disinfection methods to make them more effective at removing chemical contaminants and pathogens by introducing light-activated catalysts. “We’re doing this on a decentralised scale,” explained Porley, adding, “But it could easily slot into an industrial scale and take over things like the chlorination process.”

Elaborating on the significance of her research, Porley told the aquaNOW Audience that many emerging contaminants were not considered at the time current large-scale industrial processes were established, meaning they are not designed to remove them. These include modern chemicals used in personal care, cleaning products and fabric dyes. “It’s important for research to develop new water treatment methods, because at the moment we just don’t have the facilities to remove everything,” said Porley. “If those things aren’t filtered out by our water treatment systems, they end up in the oceans where they can disrupt marine life, which is a massive carbon sink,” she continued.

Porley also took the opportunity to call for the increased use of science and innovation to solve water pollution issues such as micro-plastics. “We need to figure out methods that are really effective but also economical, so that there’s no hesitation to implement them,” she said. In the face of financial and infrastructure obstacles, she stressed the need for research to prove that it can be done, that the technology exists and to make it worthwhile.

It was a sentiment echoed by Danielle Guillard-Picher, Global Coordinator for Water and Climate Processes with the Global Water Partnership. She called for an “all-of-society approach to overcome challenges together. “We need to look at making progress through partnership between government, civil society, private sector and academia,” she said, stressing the need for action to take place at multiple levels from global to local.

As the panelists finished off the audience by considering their wish lists for COP26, Guillard-Picher reiterated that COP is an ongoing process and made a special plea to the UK in its role as president for a full year to “inscribe building climate resilience through water action and investments on the agenda of COP27”, while Lamb said: “We need everybody to play their part and seize the day.”

The aquaNOW Audiences are panel discussions with key experts and stakeholders from the water community that aim to highlight the wide-ranging global and local challenges and solutions surrounding water as a natural resource and common good. Moderated by David Duncan, the aquaNOW Audiences are produced by The water Diplomat and supported by Scotland the Hydro Nation.

The next aquaNOW Audience will take place on World Water Day, Monday 22 March, themed around the non-economic values of water.