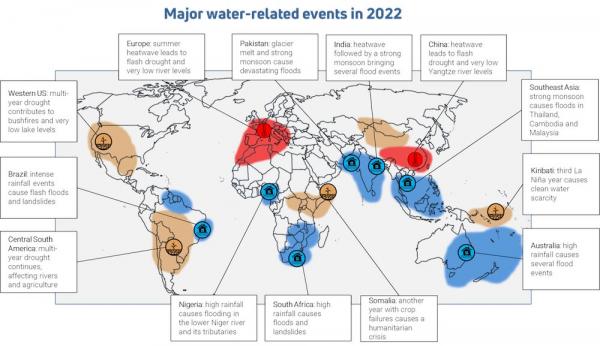 The global water cycle is changing due to the influence of global warming. This is a key conclusion of the Global Water Monitor Summary Report 2022. The report states that overall, over 2022, a so-called la Niña pattern persisted in the Pacific Ocean for the third year in a row. La Niña is a weather pattern that forms part of a cycle that lasts between two and seven years and lowers the temperature of surface ocean waters on the tropical west coast of Latin America.

During 2022, the persistent la Niña phenomenon resulted in above average rainfall in southeast Asia and Oceania and below average in the Americas. The northern and eastern Indian ocean were also warmer, leading to heatwaves and a wet monsoon in India and Pakistan. The Global Water Monitor summary report for 2022, released on the 7th of January, is a first ‘demonstration’ report on key elements of the global water cycle. The report is produced by a consortium of public and private research and development organisations which have a shared goal of providing global information on climate and water resources. It provides summary overviews of global and regional trends in precipitation, air temperature and humidity, soil water availability, river flows and water volumes in natural and artificial lakes.

Comparing these trends with the averages in the period 1995-2005, the authors noted that global air temperatures above land were 0.56°C above the 1995-2005 average, making 2022 the seventh warmest year on record since 1979. 27 countries experienced unusually high temperatures, especially in Europe, parts of the Pacific, the Middle East, Central Asia and China. Air humidity above land was lower than the 1995-2005 average for the twelfth year in a row, by 18%. Soil water content was 3% above the global average compared to the baseline period , and the number of times soil moisture records were broken was 58% above the 1998-2005 average.

The report also analyses regional trends and noted a severe heatwave followed by massive flood in Pakistan, a severe heatwave followed by a strong monsoon in India, a very wet monsoon in south Asia, flooding followed by a heatwave and flash drought in China, the failure of both rainy seasons in Somalia, intense rainfall causing flash floods in South Africa, a very wet rainy season and widespread flooding in Nigeria, a summer heatwave and flash drought in Europe, a multi-year drought in the western USA, heavy rainfall, floods and landslides in Brazil, a multi-year drought in the Paraná-Paraguay River Basin, a wet year with widespread flooding in Australia, and water scarcity in Kiribati.