The government of Israel has announced plans to top-up the Sea of Galilee which currently stands at its highest levels since the beginning of the drought in 2014. The Sea is only 67.5 cm from full capacity.

The top-up will come from desalination plants through reversal of water flow using the vast network of tunnels, pumps and pipes that have been used for at least 60 years.

The Sea is the country’s largest freshwater reservoir and recent high precipitation in the North of Israel has contributed to the current abundance of water in it.

Nevertheless, the government plans to take advantage of the country’s leading expertise in the process of desalination and is embarking on plan to pump excess desalination output to bring the lake to full capacity.

Israel’s average temperature has risen by 2 degrees Celsius in the last two decades, precipitation, generally, has decreased and population has increased. These trends are expected to be sustained and some models are suggesting about 10 to 15 percent less precipitation in the second half of the 21 Century. The “new” infrastructure is expected to meet some of the increased demand.

Supporters of the plan hail the technological achievements that brought Israel from water scarcity to water abundance. This capacity has also allowed Israel to establish and strengthen diplomatic ties with Arab countries like UAE, Bahrain and Morocco.

Critics of the plan include humanitarians and environmentalists.

According to a UN report, 14,000 Palestinians who live on Israel-controlled lands of the West Bank have no access to a water network. Many more rely on Israeli cistern trucks that tour the country selling water.

In addition, the country’s leading desalination technology has been met with some criticism by environmentalists who say the process relies too much on fossil fuels and, in the long run, contributes to issues related climate change and exacerbation of these related problems. 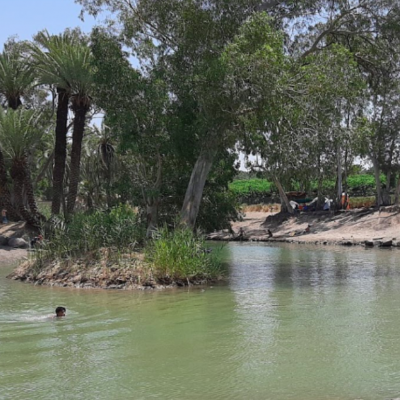 Israel's national water company, Mekorot, is on the verge of signing its first deal to provide Bahrain with desalination technology for brackish water. Although the company did not...