After two years of development, the National Water Resource Strategy (NWRS) of Somalia was launched in October 2021, at a ceremony in the capital Mogadishu.

The process towards the development of the NWRS commenced in July 2019 at the request of the Prime Minister and followed an inclusive process based on Integrated Water Resources Management (IWRM) principles. The current Minister of Energy and Water Resources, Hassan Abdinur, underlined the continued need to build capable and competent institutions at federal, state and local government levels that work collaboratively to address the existing problems.

Folllowing years of conflict and drought, institutional reforms since 2011 have ushered in a period of relative stability for Somalia, and development partners such as the World Bank have provided assistance for institution building and enhanced service delivery. Creating a national ‘water compact’, as proposed by researchers at Lund University, will help to overcome the fragmentation of water management by embracing water governance, water use and services, water resilience, and integrated water resources management. A broad-based national consultation process towards the development of the NWRS and national priorities, conducted throughout 2020, involved government ministries, development partners, experts and international and local non- governmental organisations.

Much of the north of Somalia is classified as arid or semi-arid land, unsuited to crop production and traditionally used as grazing land by pastoralists. Recent extensive droughts have significantly increased livestock deaths and reduced harvests, while an increased incidence of flash flooding has exacerbated soil erosion.

The south of the country has higher rainfall but is prone to regular flooding and there is a lack of impoundment structures to capture and use runoff effectively. Additionally, much of the south of Somalia falls within the Juba-Shebelle River basin, which is a transboundary river basin that is not covered by a legally binding treaty between riparian countries Ethiopia, Kenya and Somalia. Somalia is a downstream riparian, receiving 90 Percent of its flow from the Ethiopian highlands and from Kenya, and Ethiopia has objected to water infrastructure development by Somalia in the past.

Current trends indicate that Somalia can expect an increased frequency of precipitation as a result of climate change, and thus increased climate resilience is among the objectives to be pursued by the strategy. 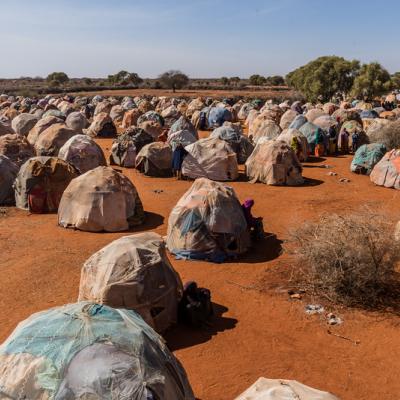 Somalia teeters on the brink of another humanitarian disaster as the country continues to struggle with drought, devastating locusts and the effects of COVID-19. "If the rains d...