Water As A Weapon Of War Or Instrument Of Peace 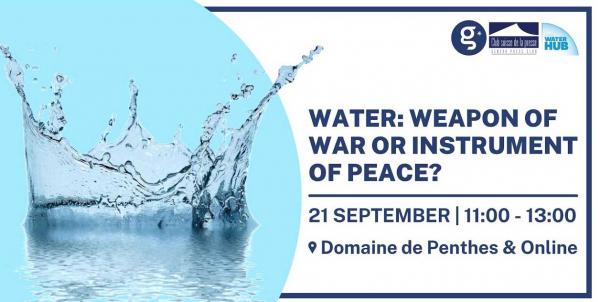 On September 21, World Peace Day, global and African insights into water diplomacy were presented at an event hosted by Geneva Solutions, the Geneva Press Club and the Geneva Water Hub.

Michael Møller, formerly head of the United Nations in Geneva, underlined the existential stakes of water security, arguing that water has allowed civilisations to flourish and others to collapse. Moller pointed out water is integral to the primary work themes of the United Nations, i.e. peace and security, human rights and development.

The transboundary and shared nature of freshwater resources involves the risk that freshwater becomes an element in interstate conflicts in which warring parties seek to control of dams, dykes and other forms of infrastructure, while the activities of extractive industries are a common cause of local protests. Armed conflicts themselves affect access to clean water through direct attacks on infrastructure or pollution of water resources.

Nevertheless, water is also the source of cooperation and confidence building: since the establishment of the United Nations, more than 200 water treaties have been negotiated across the world. Furthermore, the human rights to water and sanitation have been recognised by the United Nations as rights that are not merely aspirational but create obligations for states to refrain from actions that negatively impact on water resources including through pollution, overextraction and depletion of water resources.

Water is also a sustainable development goal in its own right, a sine qua non for all other SDGs and a key to building resilience to climate change. Panelist Patrick Youssef from the International Committee of the Red Cross  (ICRC) emphasised the disruption of social fabric in situations of armed conflict. The collapse of public services disables mechanisms of social justice and leads to unregulated competition over access to water; all compounded by the effects of climate.

In situations of conflict, denial of access to humanitarian services and physical attacks on water infrastructure have been used as leverage to pressurise local populations. Boubacar Barry, expert in charge of Water and Rural Development at the 9th World Water Forum, emphasised the fact that both peace and development feature in the title of the upcoming World Water Forum in Dakar, Senegal, i.e. ‘water security for peace and development’.

He argued that looking at peace requires a focus on development: water security depends on domestic supply and is required for economic development. Among the reasons that Senegal was selected to host the World Water Forum is that it has proven that water diplomacy can work: despite conflicts between Senegal and Mauritania, cooperation on water between Senegal, Mauritania and Mali continue to exist, and the basin states wish to show the world that despite differences it is possible to cooperate around water.

Specifically, in Sahel region, water scarcity is economic in nature rather than physical, i.e. it is the costs of building water infrastructure rather than the absolute scarcity of water that is the primary obstacle to water security in the region. Jean Bosco Bazie, President of Eau Vive Internationale, underlined the importance of local actors in strengthening the values inherent in local village culture which is centred around access to water points. In partnership with the Geneva Water Hub, Eau Vive has facilitated dialogues with local actors from Mali, Burkina Faso and Niger to explore local solutions, which emphasise the role of local communities and water user associations.