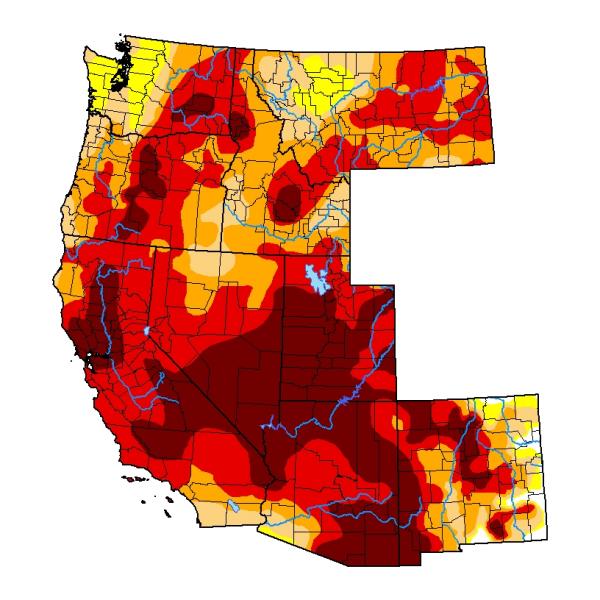 Historic levels of drought in the western United States are threatening the Colorado River system, while more than 130 wildfires rage across the western states and farmers in the US and Canada are looking at decimated crop yields ranging from 50 to just 20 Percent of average.

Meanwhile, US intelligence experts are warning that the extreme weather has serious implications for national security.

The water supply report dated 19 July for the Lower Colorado puts Lake Mead at just 35% full and the overall system at 41% full, compared with 52% for the same time last year. Local media reports are predicting the federal government will declare a water shortage for the Colorado River system, while data released by the US Drought Monitor showed that more than 60% of the land in the western states is experiencing extreme or exceptional drought conditions.

The wildfires burning from north to south are causing concern, not just because of their scale and ferocity, but also because they are happening so early in the season. Speaking to The Guardian, climate scientist Daniel Swain from the University of California Los Angeles said that the extreme conditions could set the stage for "considerably worse" fires in the late summer and autumn, when strong winds typically fuel the biggest fires.

The Bootleg fire in Oregon has been described by firefighters as "the most extreme you can find" and is even generating its own weather.

There is also a global impact already evident in crop and grain prices as a result of the US drought. According to a recent World Agricultural Supply and Demand Estimate report, 2021/22 corn, soybean and spring wheat stocks are "dramatically low". Corn prices are close to an 8-year high and there has been a steep rise in prices for oilseeds like canola. The US is depending on a bumper corn harvest in the east and south of the country to make up for the shortfall in the west.

Writing in The Hill, intelligence expert Erin Sikorsky pointed to tensions among communities with competing claims to water supplies for irrigation along the Oregon-California border as a possible harbinger of climate-related instability in the US.

"The warning lights are blinking red," she wrote. "Broiling temperatures, severe water stress and off-the-charts fire danger create both tangible security risks — such as threats to US military infrastructure — as well as more intangible, complicated risks such as increased societal turmoil in a country still recovering from the political and pandemic shocks of 2020."

Sikorsky, who is deputy director of the Center for Climate and Security and director of the International Council on Climate and Security, points to an unprecedented lack of trust in government and political polarisation as threats to stability in the face of extreme weather conditions. However, she feels the security risks of the drought are high, but not yet inevitable, and calls for a rapid action to scale up funding for adaptation and resilience measures.

Western US Girds For This Year's Fire Season

About 84 Percentof the western USis under some level of drought, Western states prepare for dangerous forest fires this summer.

Rising global temperatures could result in a startling increase infrequent and severe droughts and water scarcity, affecting food security and escalation in conflict and human migr... 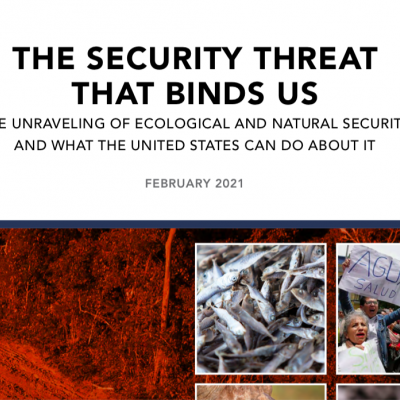